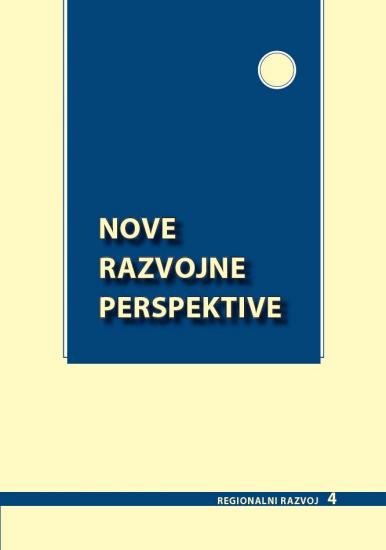 
The book Nove razvojne perspektive ('New development prospects') discusses various aspects of Slovenia’s development, focusing on general topics of regional and rural development. With regard to rural development, the following four strongly interconnected topics are primarily highlighted: cultural heritage, tourism, (organic) farming, and the environment. The volume also include broader topics that go beyond the rural character: explaining development differences in Slovenia, regional differences in the structure of occupations as a structural factor of the Slovenian economy, the flexibility of spatial systems, and new developments in presenting geostatistical data. Future plans are also discussed—that is, preparation of strategic and program documents for the new 2014–2020 financial framework. Common bases for improving the connections between spatial and development plans at the regional level are presented in addition to the spatial development guidelines used for preparing a new version of Slovenia’s Development Strategy, and the guidelines for preparing a new generation of regional development programs.