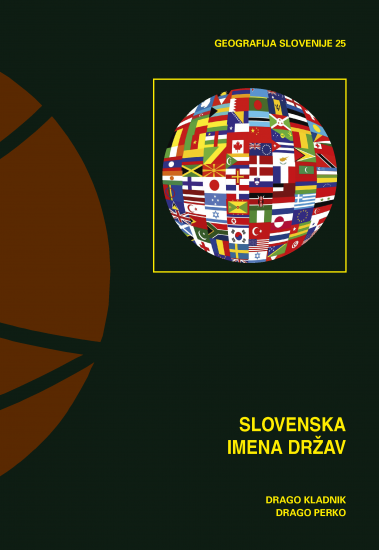 
This volume (‘Slovenian Country Names’) offers a detailed analysis of naming all independent countries and non-self-govering territories. Alongside the Slovenian short and full names of individual political territorial units, the genitive, locative, and adjectival forms of the short names, native short and full forms transliterated into the Roman alphabet (if applicable) or English and French official short and full names of individual territorial political communities, it also contains coded labels, an etymological explanation of the names, notes if needed, any alternative names, archaic names, or nicknames, and demonyms.
The volume is organized into three sections. The first is a theoretical and methodological discussion of exonyms, and it also presents the reasons for selected name forms for independent countries and dependent territories. Certain names whose usage is not uniform are presented in greater detail. The second part, in tabular format, is a detailed presentation of the names of 198 independent countries and fifty-one major non-self-govering territories with a high degree of autonomy for which corresponding political decisions could lead to their independence at any time. The third section is cartographic and presents territorial political units on colored maps with borders. The volume will contribute to more correct and more uniform use of country names, and it will be a useful aid for both individuals and institutions dealing with this issue.