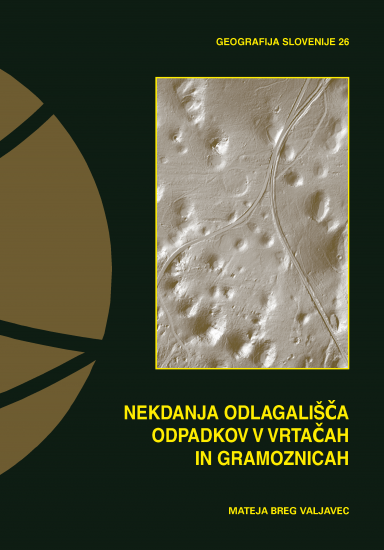 The baseline data for the former landscape are three-dimensional (3D) models of the former landscape (either digital terrain models or digital surface models) that were produced with stereo-image processing of archival aerial photos. For the sample areas of the Logatec Karst Polje and the Logatec Karst Plateau, as well as the Ljubljana Gravel Plain, relief analysis was used to define the initial state of dolines and gravel pits before they were filled with waste. The sample areas are typical landscape-ecology units from the perspective of the creation of waste disposal sites over many years in natural and manmade relief depressions. In addition to their location and area, the depressions were also defined by depth, which is an important factor for defining the quantity of hidden waste. Relief features of waste-filled depressions were defined in the current landscape based on object-oriented visual and geomorphometric analysis of a high-resolution LiDAR digital terrain model. The register of former waste disposal sites in dolines in the study area of the Logatec Karst Polje and the Logatec Karst Plateau includes ninety-two sites with a high probability of having had waste deposited in them. In the water-protection zones of the Kleče and Jarški prod water-pumping stations in the Ljubljana Gravel Plain there are seventy-one items defined as former waste disposal sites in gravel pits. The results obtained were checked in the field. The soil above the waste was sampled (probed), a cross-section of the filled depressions was measured for electrical resistance of the ground, and a phytogeographical survey was used to define indicator plants, which serve to indicate the presence of organic waste in a depression. The field research findings represent new premises for further geographic information analyses of vegetation and soil at waste disposal sites. The findings presented in this volume form an important basis for producing a register of former waste disposal sites in Slovenia, which still poses many methodological challenges connected with various types of data.