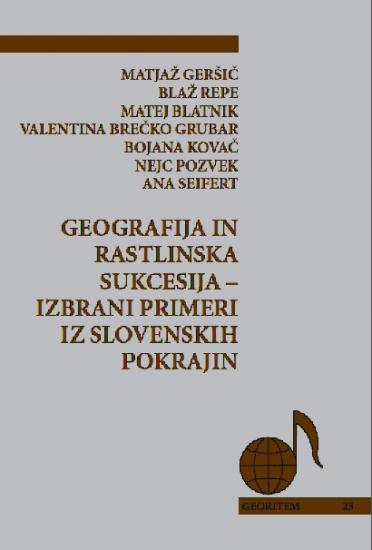 
The book (‘Geography and plant succession. Selected examples from Slovene regions’) is dealing with ecological succession which is one of three kinds of changes in vegetation. The other two are regeneration (or the result of necrosis and regrowth of organisms) and fluctuation (or changes in biomass in longer and shorter time cycles–also seasonal changes). Ecological succession or ecological sequence can be understood as a temporal-spatial clarification of the evolutionary development of a community from bare soil to a stable community which is balanced with its environment. The book is divided in two parts. In the first part, succession is presented on a theoretical basis. The development of the concept of succession through history, its mechanisms and processes carried on in it are clarified. Different types of succession as well as pioneer species and climax societies as the starting and final point of the process under consideration are described. In separated chapters, invasive species and soils as well as their role in succession are discussed. In the second part, individual selected environments (gravel pits in rivers, screes, rockfall areas, fire areas and construction pits) where the two major types of succession are prevailing are presented.