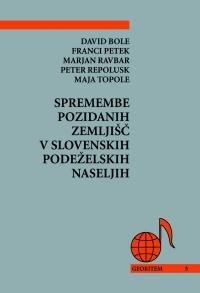 
Since Slovenia's independence, new economic and social policies have been influencing settlement patterns. Processes which had in fact begun earlier have intensified and deepened during this period, and differences within the country have become greater. The findings from this study could help support a more active land use policy and achieve a better understanding of the structure of built areas within rural settlements.

Slovene studies of rural settlements to date have been mostly concerned with general categorizations and with showing structures. They are the result of detailed social geographic, functional and physiognomic valuations of all Slovenian settlements. This time our purpose was to obtain quantitative data concerning spatial and functional changes in settlements; we approached the task by means of a detailed mapping of the areas of settlements according to basic land use categories which included: residential areas, areas with supply, service, and business activities, known as central functions, areas serving transportation and connecting functions, areas serving municipal and energy functions, and green and open spaces.
We determined the situation for last two census years, 1991 and 2002, and on this basis, the annual rate of growth of built areas in the framework of individual land use categories. We related these data to the number of inhabitants, the number of employed, and the number of jobs, as well as to the geographic location of the settlement and the daily mobility of the population. Changes in the settled areas of rural settlements were determined with the help of aerial photos and digital orthophotos, statistical data, and data obtained through field work. An expert sample included 14 rural settlements with 500 to 1100 inhabitants from different Slovenian natural and statistical regions which during this period displayed positive growth in population, jobs, and houses.
We determined how different categories of land use in a settled area changed in the period between 1991 and 2005. Most evident are differences among individual types of settlement. Land use was related to relief and type of settlement, with the geographic location of the settlement, changes in its structure, trends in the number of jobs, and daily mobility. The greatest growth in built areas was due to housing construction (70 %), which was most intensive in areas in the early phase of suburbanization, and somewhat less intensive in industrialized areas and in already formed settlements in the late phase of suburbanization. We found that the dynamics of new construction dropped in the second half of the period under study, especially in the category of housing construction, not as much in nonresidential construction. This also confirms the hypothesis that Slovenian rural settlements are increasingly under the influence of suburbanization in its later phase.
The study offers useful information to the researchers of Slovenian countryside problems, to urban and regional planners and also to students.


price
not for sale